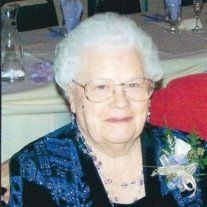 Visitation will take place 4-7 p.m., Wednesday at Lind Family Funeral Home in Parkers Prairie and continue one hour prior to the service at church.

Doris Muriel Arvidson was born May 6, 1921, to Clarence and Emma (Rusten) Rambow in Raymond, Minnesota. Shortly afterwards, they moved to Alexandria. She attended country school and graduated from Central High School in Alexandria in 1939. She was very active in 4-H in Douglas County. Doris met her future husband, Elvin Arvidson, when he came to sell Surge milking machines to her dad. They were married August 10, 1941, at the Methodist Church in Alexandria. Following their marriage they lived and worked on the home farm in Eastern Township, near Parkers Prairie, until retirement. They were both very active in Esther Lutheran Church, Eastern Stars 4-H Club and rural Joy School. Following their retirement, they bought an Airstream Trailer and traveled all over the United States with the travel club. They spent many delightful winters in Weslaco, Texas where they made many, many friends. Doris was an accomplished seamstress and enjoyed teaching her daughters and granddaughters to sew. She also made beautiful quilts for high school graduations and weddings, until macular degeneration prevented her from sewing. Doris was very proud of her Norwegian heritage. She learned to make lefse from her mother and taught three generations of her family to make it, too. Her husband, Elvin died in 2001. It was then she made the decision to move into the McCornell Court Assisted Living apartments in Parkers Prairie. She loved being around all the people who lived there, or came to visit. After she could no longer live alone, she moved to St. William's Living Center.

She was preceded in death by her parents; husband; sister, Phyllis Johnson; and brother, Harold Rambow.

To order memorial trees or send flowers to the family in memory of Doris Arvidson, please visit our flower store.
Send a Sympathy Card