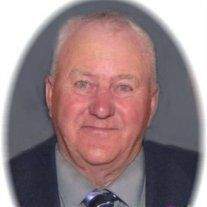 Funeral services will be 11:00 a.m., Tuesday, July 10, 2012 at Mount Calvary Lutheran Church in Miltona with Rev. William Stockman officiating. Music will be provided by organist, Deb Joachim and a duet performed by his grandson and wife, Ezekial & Mandy Fuhrman. Interment will be at the church cemetery with military honors provided by the Miltona VFW Post # 7826.

Visitation will be 5-8 p.m., Monday at the Lind Family Funeral Home in Miltona and continue one hour prior to the service at the church.

Donald Henry Fuhrman was born December 1, 1935, in Miltona Township, Douglas County, Minnesota to Henry and Rebecca (Bennett) Fuhrman. He grew up farming and working for area farmers. At the age of 18, he served his country in the U.S. Navy. After his honorable discharge, he returned to Minnesota and moved to Minneapolis where he worked at Swift & Co., a meat packing plant. On June 29, 1957, Don was united in marriage to Anna Irene Nissila at St. Paul's Lutheran Church in Moe Township, Douglas County, Minnesota. When they had saved up enough money, they purchased a farm which Don had worked at as a twelve year old. He had always wanted to own it someday and was able to make that dream come true. They dairy-farmed and also raised pigs and chickens, in addition to crop farming. Don was a member of the Mount Calvary Lutheran Church and was active in many of the church functions. He also belonged to the Miltona VFW Post # 7826. He enjoyed hunting, fishing and playing cards, especially when he was winning against his grandkids or in-laws. Don enjoyed being with family and was very proud of his five sons.

He is preceded in death by his parents; wife, Anna in 2005; brother, Leonard Fuhrman and sister, Myrtle Boever.

To order memorial trees or send flowers to the family in memory of Donald Fuhrman, please visit our flower store.