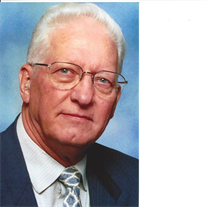 Donald "Don" W. Carlson, age 76, of Alexandria, died Thursday, February 4, 2016, at his home, with his wife by his side, under the care of Knute Nelson Hospice.

Donald Wayne Carlson was born on June 28, 1939, to Arthur and Gladys (Mahn) Carlson in Alta, Iowa. He was baptized March 10, 1940, in Alta, Iowa and confirmed August 1, 1954, at Salem Lutheran Church in Osakis. Don graduated from Osakis High School in 1956. Following his education he worked in construction for Art Vangstad in Osakis and Graco Inc., in Minneapolis for a few years. Don served in the United State Army as a Specialist E4, until his honorable discharge. He was united in marriage to Marilyn Zabel on July 9, 1966, at Immanuel Lutheran Church in Plainview, Minnesota. Following their marriage he worked for Aljon Tool, Inc. in the Twin Cities for 36 years until his retirement in 2001. He and his wife, Marilyn moved to Alexandria in 2011. He was a member of New Life Christian Church in Alexandria and the Coon Rapids Archers. Don enjoyed archery, hunting, fishing, woodworking and cribbage.

He was preceded in death by his parents; and brother, Arlon Carlson.

Urnbearers are his grandchildren.

To order memorial trees or send flowers to the family in memory of Don Carlson, please visit our flower store.
Send a Sympathy Card