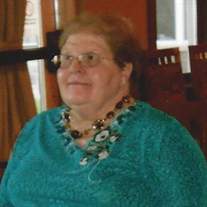 Visitation is 5-7 p.m., Wednesday at Lind Family Funeral Home in Alexandria and will continue one hour prior to the service at the church.

Diana Dorothea Mae Baker was born a twin August 19, 1942, to Victor and Dorothy (Colteaux) Lubben in Round Lake, Minnesota. Her twin brother, Daniel died at birth. Diana was baptized and confirmed at Bethel Lutheran Church. She was raised on the family farm in Round Lake and was involved with Indian Lake 4-H Club. She especially enjoyed sewing projects, raising beef, animals, gardening and cooking. She was also very active in Luther League and enjoyed its many activities. Diana was united in marriage to Gary Baker June 18, 1959. Following their marriage, they moved to Oakland, California where their first son, Randy was born in 1961. Following his birth, they moved to Hayward, California where their second son, Gene was born in 1964. During their years in California, Diana was involved in church activities, leading decorating classes and teaching Sunday school. The family lived in Fremont before moving to Grass Valley in 1972. In 1979, they left California and moved to Alexandria and lived on Lake Carlos where Diana loved fishing, and camping with her family. Diana began a 20 year career in decorating for Home Interiors and Gifts, Inc., in 1986, receiving many awards. She and her husband moved back to Grass Valley for four years but returned to Alexandria in 1990. She also worked for Herbergers for several years, retiring in 2003, due to her husband's ill health. Her husband, Gary died in 2008. Diana lived at Nelson Gables, Legacy Apartments, and Windmill Ponds before moving to Grand Arbor in 2012, where she was involved with making cards and teaching card making classes.

She was preceded in death by her twin brother; parents; son, Gene in 2001; husband, Gary in 2008; and brothers-in-law, Russell Lentz and Lewis Grotjohn.

Diana is survived by her son, Randy (Shelbe) Baker of Alexandria; brother, Tom (Sandy) Lubben of Fulda; two sisters, Pat Grotjohn of Stewartville and Judy Lentz of Central Point, Oregon; along with several nieces and nephews.

To order memorial trees or send flowers to the family in memory of Diana Baker, please visit our flower store.