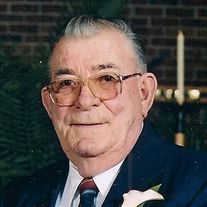 Mass of Christian Burial is 11:00 a.m., Thursday, July 10, 2014, at St. Nicholas Catholic Church in Belle River with Fr. Dave Petron officiating. Music is provided by the Belles of St. Nicholas. Burial is at the church cemetery.

Visitation is 5-8 p.m., with a 7 p.m., prayer service, followed by a rosary, Wednesday at the church. The visitation will continue one hour prior to the service.

Dewey Frederick Steidl was born in Belle River Township on December 12, 1930 to Peter and Angeline (Beheng) Steidl. He was baptized and confirmed in St. Nicholas Catholic Church in Belle River and was a life-time member of the parish. Dewey served in the United States Marine Corps from 1952 to 1954. On June 18, 1957 Dewey Married Rose M. Hagedorn at St. Ann's Catholic Church in Brandon. Dewey worked in heavy equipment construction all his life, the last 20 years of his career as a Project Superintendent for Park Construction Company of Minneapolis. He worked in several states building dams, golf courses, freeway, and airports. He retired in 1992. In addition, Dewey was a lifetime farmer and licensed cattle dealer. Dewey enjoyed hunting, fishing, casinos, playing cards, and traveling.

Dewey was preceded in death by his parents; and brothers, Warner, Joseph, Nick, John, and George.

Dewey's pallbearers are his sons.

To order memorial trees or send flowers to the family in memory of Dewey Steidl, please visit our flower store.