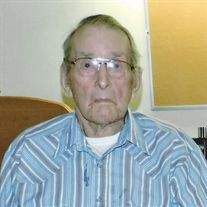 Delmer D. Wilke, age 90, of Parkers Prairie, died Thursday, October 30, 2014, at St. William's Living Center.
Funeral Services are 2:00 p.m., Monday, November 3, 2014 at Immanuel Lutheran Church in Parkers Prairie with Rev. Kirk Lee officiating. Music is provided by organist, Maureen Diedrich. Burial is at Parkers Prairie Cemetery.
Visitation is Monday, two hours prior to the service at the church.
Delmer Deraldd Wilke was born May 22, 1924, to Albert and Viola (Proehl) Wilke in Parkers Prairie. He was confirmed on August 7, 1938, at St. James Lutheran Church in Effington Township. He farmed with his parents until serving in the U.S. Army from 1945 to 1946, with part of his service in the Military Police force and lineman school. He was united in marriage to Verna Grothen on December 4, 1946, at the parsonage of St. Paul's West Miltona. They moved to their farm in May of 1947, and continued to live there until moving to St. William's Living Center in July of 2014. Delmer was a lifelong member of Immanuel Lutheran Church. He served on the Eastern Township board for 40 years and was also instrumental in forming Parkers Prairie Ambulance Joint Powers board; serving as Chairman for 17 years. Delmer loved farming, hunting, fishing, beer and gum drops.
He is preceded in death by his parents; and brother-in-law, Ruben Hollatz.
Delmer is survived by his wife of 67 years, Verna; brother Vincent (Erma Jean) Wilke of Parkers Prairie; sister, Ardean Hollatz of Alexandria; two nephews, Keith Wilke and Tim Hollatz; niece, Janet (Wilke) Carlson and many other nieces and nephews.
Pallbearers are Michael Diedrich, George White, James Grothen, Keith Wilke, Terry Carlson and Tim Hollatz.
Family prefers memorials to Parkers Prairie Ambulance.

To order memorial trees or send flowers to the family in memory of Delmer Wilke, please visit our flower store.