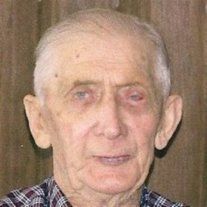 Visitation will be 5-7 p.m., Wednesday, at Lind Family Funeral Home in Parkers Prairie and continue one hour prior to the service at the church.

Delbert John Ritten was born June 10, 1927, to Joseph and Josephine (Kuhne) Ritten in Spruce Hill Township, Douglas County, Minnesota. He grew up in Spruce Hill Township and attended country school. He was active in 4-H and attended the Minnesota State Fair two times as Grand Champion with his prized Holstein. He was united in marriage to Loretta Schmidt June 2, 1964, at St. Nicholas Catholic Church in Belle River. During his life, Delbert worked for the Avon Silo Company until he retired in 1982. His wife, Loretta died August 7, 2003. He enjoyed woodworking, fishing, hunting and gardening in his earlier years. He especially enjoyed playing cards, games and jigsaw puzzles with his daughters.

He was preceded in death by his parents; wife, Loretta; two brothers, Marvin and George and sister, Josephine Drum.

To order memorial trees or send flowers to the family in memory of Delbert Ritten, please visit our flower store.
Send a Sympathy Card