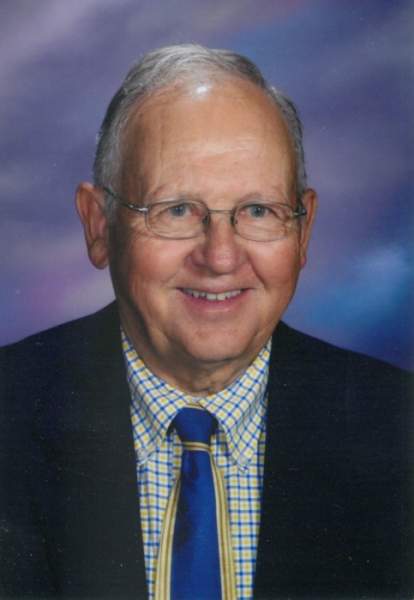 David A Dittberner, age 84 of Leaf Valley, MN, arrived in his Heavenly home on July 22, 2017 after courageously enduring a 5 ½ year challenge with Alzheimer’s.

David was born in Leaf Valley, MN on March 31, 1933 to Emma (Foslien) and Arthur Dittberner, and baptized and confirmed at Ebenezer Lutheran Church in Leaf Valley. He attended District #23 one room school where his mother had been a teacher eight years earlier. He and his parents and sisters lived with Grandpa Albert Dittberner on his farm until 1943 when Art and Emma bought “Dittberners’ Store” (now the Leaf Valley Mercantile). The family, along with Grandpa Albert Dittberner, moved to the house next to the store where they lived and then Dave attended District #28.

Dave graduated from Central High School in Alexandria in 1951. In high school he participated in three sports, drama, band and choir.  He learned how to play trumpet the summer before starting high school from his Grandpa Alfred Foslien and because of this, had the honor of playing under Vince DeNino, director.

He received an Associate’s Degree from Concordia College, St. Paul in 1953, a Bachelor of Science in education from Concordia Teachers College in Seward, Nebraska in 1955.  He completely paid for two years of college by working hard shoveling rock (gandy dancer) for the railroads.  He earned a Master’s Degree from the University of Minnesota in 1965.

Dave greatly enjoyed a 40-year career in Christian education at Gethsemane Lutheran Church and School in Maplewood, MN where he was loved and respected.  He taught for 26 years, then served as principal for 14. In addition to his teaching responsibilities throughout the years, he also served as bus driver, athletic director, youth director, Sunday school teacher, band director, directed a youth choir and coached many athletic sports! He always ended his daily announcements with, “Remember, God loves you, and so does Mr. D!”

Dave worked a variety of summer jobs to pay for college and provide for his family–-making calendars, selling shoes, a pump jockey at a gas station, and loading trucks at a bakery. He helped his wife, Carol, complete her B.S. degree at the University of Minnesota by officiating basketball at St. Paul Men’s Athletic Club.  He was a member of the St. Paul Officials Association.  His last job was officiating a junior high girls’ basketball game at age 79.

Dave married his college sweetheart Caroline (Klute) on June 8, 1957 at St. Peter's Lutheran Church in Hampton, Nebraska. Together they raised four children, Mike, Tim, Joel and Debbie. He and Carol moved to their retirement home on Lake Miltona in 1995. Dave enjoyed fishing, tending his yard and golfing with his grandchildren and in the Miltona Golf Leagues.  He and Carol were also super fans at the games, concerts and activities of their eight grandchildren.

Dave is registered as a whole body anatomical donor with the University of Minnesota Medical School Anatomy Bequest Program.

To order memorial trees or send flowers to the family in memory of David "Dave" Dittberner, please visit our flower store.