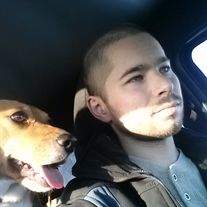 Visitation is 5-8 p.m., Sunday at Lind Family Funeral Home in Parkers Prairie and continue one hour prior to the service at the church.

David Scott Diedrich was born October 4, 1988, to Scott and Sarrina (Lockaby) Diedrich in New Prague, Minnesota. He grew up in the Alexandria and Parkers Prairie area where he attended public school. He graduated from Parkers Prairie High School in 2007. He attended North Dakota State University in Fargo for a year. He then attended Wadena Tech to learn the plumbing trade. Following his education, David returned to Fargo where he was working on his journeyman's license with Precision Plumbing. In November of 2012, David was diagnosed with leukemia. He fought a courageous battle with the disease, receiving treatment and a stem cell transplant. David was a member of Trinity Lutheran Church in Millerville. He enjoyed sports, especially, basketball and football. His favorite pastimes included playing video games with his friends and attending rock concerts. He was happiest when he could sleep.

David was preceded in death by his step-grandfather, Darold Pflugradt.

David is survived by his father, Scott of Alexandria; great-uncle, who helped raise him, Dale Diedrich of Parkers Prairie; grandmother, Jane Pflugradt of Garfield; girlfriend, Cassie Riebe of Fargo; along with many great-uncles, great- aunts, cousins, a host of friends and loyal companion, Zoey.

To order memorial trees or send flowers to the family in memory of David Diedrich, please visit our flower store.