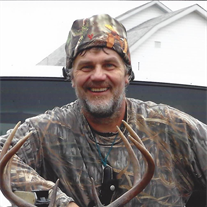 Darrell Dean Moats was born on August 18, 1969, to David and Alice (Wolske) Moats in Brainerd. He was baptized in Minneapolis and confirmed at Immanuel Lutheran Church. He attended school in Anoka and Parkers Prairie. Following his education he worked in roofing and seal coating driveways. He owned his own auto body shop where he repaired and painted cars, beautifully, which was his passion. Darrell was known as jack-of-all-trades. Darrell met the love of his life, Michelle Hansen, 27 years ago. They were united in marriage on April 28, 2007, at Immanuel Lutheran Church. They were blessed with two sons, Matthew and Brandon, they were his pride and joy. His family was his life and he protected them with all he had. He was a member of Immanuel Lutheran Church. Darrell was an avid hunter and fisherman. He especially enjoyed horn hunting during deer shedding season. He will be deeply missed by his family and friends.


To order memorial trees or send flowers to the family in memory of Darrell Moats, please visit our flower store.
Send a Sympathy Card