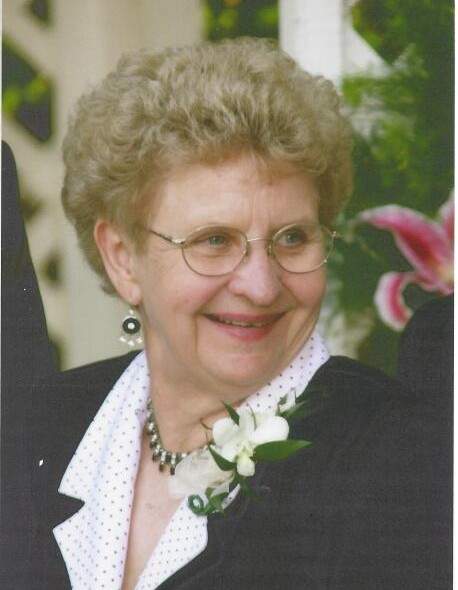 Darlene A. (Withrow) Walsh, age 85, of Parkers Prairie, passed away with her husband, John by her side on Monday, April 26, 2021, at St. William’s Living Center in Parkers Prairie.

A Mass of Christian Burial will be held at 11 a.m., Tuesday, May 4, 2021, at St. William’s Catholic Church in Parkers Prairie with Fr. Peter VanderWeyst officiating. Music is provided by organist, Becky Koep and the church choir. The service will be live streamed from Darlene’s obituary page on the funeral home website. Interment is at Sunset Memorial Park Cemetery in Minneapolis on Wednesday, May 5.

Visitation is from 5-7 p.m., Monday, May 3, at St. William’s Catholic Church in Parkers Prairie. The visitation will conclude with a prayer service and rosary at 7 p.m. and will continue one hour prior to the service.

Darlene Ann was born on March 6, 1936, to John “Jack” and Esther (Keil) Allison in Mahnomen, Minnesota. The family moved from Waubun, to Ottertail, then to Alexandria. After her parents divorced, she moved with her mother to Minneapolis where she found life-long friendships with Jeannette and Myrtle. Darlene graduated from Central High School in Minneapolis. She was united in marriage to Wallace “Wally” Withrow on December 4, 1954. This marriage was blessed with four loving daughters. As they were growing up, she dedicated herself to teaching them to cook, bake, knit, crochet, sew, garden, embroider, cross-stitch and share her passion for jigsaw puzzles. By example she taught them love and compassion. The family lived in Minneapolis until 1965, when they moved to Alexandria. They were very involved in the creation of the Vintage Car Club of Alexandria which is still going strong today. The entire family was included in the restoration of many antique cars, spending countless hours sanding, painting, and Darlene doing all of the upholstering. Many of the cars were in parades, so costumes were also made. They spent many days traveling to attend antique and toy shows all across the United States. After Wally retired, they moved to Park Rapids. Darlene was widowed in September 1995, when he died unexpectedly. Darlene moved back to Alexandria in 1996 and formed long-lasting friendships with Betty, Ruthy, and Mona. They all enjoyed many outings, including attending local concerts and dances. It was at one of these dances where she met John Walsh. They were married on December 16, 2000 and lived on John’s farm near Parkers Prairie. Darlene adapted quickly to life on the farm and her new enlarged family. She found herself enthralled with her new family which included John’s seven children, grandchildren, and eventually great-grandchildren. She seldom forgot birthdays, attended many sports games, and school functions. She continued to enjoy knitting, crocheting, and jigsaw puzzles. Darlene enjoyed learning new computer skills and keeping up to date with family and friends online. One of her favorite pastimes was to watch the birds at their bird feeders. The final seven months of her life were very eventful. John celebrated his 90th birthday in September. They celebrated their 20th wedding anniversary in December, and she celebrated her 85th birthday in March. Her cancer diagnosis came as a shock to everyone, and her decline was quick. She passed away at St. William’s Living Center in Parkers Prairie on Monday, April 26, 2021, with John at her side.

Our thanks and praise to the entire St. William’s Living Center staff and to Hospice of Douglas County. They truly gave her the best care we could ask for.

To order memorial trees or send flowers to the family in memory of Darlene (Withrow) Walsh, please visit our flower store.