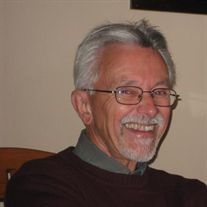 Daniel "Dan" G. Snyder, age 72, of the Alexandria, Minnesota area, peacefully entered into the presence of his Savior and Lord, Jesus on Thursday, May 21, 2015, at his home surrounded by his wife and two daughters.

Memorial services are 11:00 a.m., Friday, May 29, 2015, at Alexandria Covenant Church in Alexandria with Rev. John LeVahn officiating. Music is provided by Nancy Holm.

Visitation is 5-8 p.m., Thursday at Alexandria Covenant Church and will continue one hour prior to the service at the church on Friday.

Daniel George Snyder was born December 21, 1942, to Raymond and Helen (Wurdell) Snyder in St. Paul. He grew up in St. Paul where he attended Central Lutheran Elementary School, and graduated from Wilson High School in 1960. Dan continued his education at St. Paul TVI and the University of Minnesota. Following his education, he worked at Fox's Pure Oil and Twin City Welding. He was united in marriage to Dorothy Fair August 6, 1965 at Hamline United Methodist Church in St. Paul. Dan's career was with Twin City Testing where for 44 years, he certified welders. He and his wife lived in Anoka on their first farm, DorDan Arabians, where they raised and showed horses throughout a five state area for 5 years. They returned to St. Paul where they lived for 25 years. In 1998, they moved to their dream farm in rural Carlos where he continued working remotely for Twin City Testing until his retirement in 2010. He was a member of the Alexandria Covenant Church. Dan enjoyed collecting 1960's muscle cars and more recently rekindled his interest in Harley-Davidson motorcycles. He was especially fond of the outdoors and remained a good steward of this gift.

Dan's life was a testimony of the power of a personal relationship with God through Jesus Christ.

He was proceeded in death by an early miscarriage of a dearly wanted child, and his father, Raymond.

Honorary urn bearers are his grandchildren.

To order memorial trees or send flowers to the family in memory of Daniel Snyder, please visit our flower store.
Send a Sympathy Card