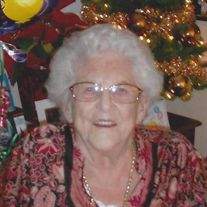 Visitation is 4-7 p.m., Thursday at Lind Family Funeral Home in Miltona and will continue one hour prior to the service at the church.

Cora Dora Bast was born December 10, 1919, to Henry and Rebecca (Bennett) Fuhrman at home in rural Parkers Prairie. She was baptized at home and confirmed at St. Paul's Lutheran Church in West Miltona. She attended country school through the eighth grade near Lake Vermont. She was united in marriage to Robert Bast on July 25, 1943, at the St. Paul's Lutheran Church parsonage in West Miltona. Following their marriage they moved to Fort Riley, Kansas where her husband was stationed. She worked on the US Army Base as a personal attendant to the Lieutenant. Cora and Bob returned to dairy farm near Miltona where their first son, Raymond was born in 1945. He died as an infant a short time later. Following Raymond's death, they were blessed with five more children. Cora primarily milked cows, but also worked cleaning cabins, painting exterior buildings, providing daycare, and her favorite job was to waitress at Chet's Lakeside Inn. Cora was a member of Mt. Calvary Lutheran Church and its LMWL. She was a lifetime member of the Miltona VFW Ladies Auxiliary Post#7826, where she made quilts, trimmed stamps for wounded veterans, and served as its chaplain. She served as a 4-H Leader and also volunteered at the Rose City Threshing festival. She enjoyed gardening, dancing, playing cards, trapping gophers, and fishing and picnicking at Lake Vermont. She was known for her cooking, especially potato salad, baked beans, and her famous jam and jelly. Cora loved when her friends and family came to visit. She was a great listener and loved to talk. She was known for loving her church and having a strong faith.


To order memorial trees or send flowers to the family in memory of Cora Bast, please visit our flower store.