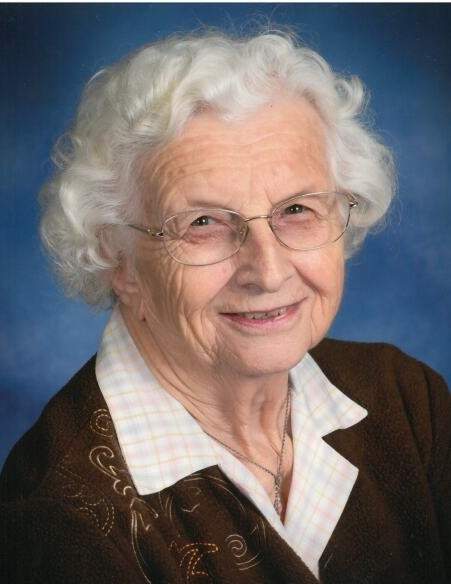 Mass of Christian Burial is 11 a.m., Saturday, March 6, 2021, at St. John Nepomuk Church, near Lake Reno with Fr. Bob Kieffer officiating.  Music is provided by organist, Pam Anderson and vocalist, Sandra Munson. The service will be broadcast on 105.3 FM Radio to cars in the parking lot for those not able to attend the service due to limited space.  A private family burial will take place at a later date at the Bohemian Independent Cemetery.

A visitation will be 5-7 p.m., Friday, March 5, 2021, at Lind Family Funeral Home in Alexandria concluding with a 7 p.m., prayer service.  The visitation will continue one hour prior to the service at the church. Please honor all COVID-19 health mandates, including social distancing and wearing of facial coverings.

Christine was born on May 28, 1930 at home in Lake Mary Township, Douglas County, Minnesota to Wencil and Antonia (Kalina) Doraska.  Christine was a life-long member of St. John Nepomuk Catholic Church near Lake Reno, where she was baptized in July 1948, and confirmed in spring 1953.  Christine attended Country School District #14 Sunny Slope School by Lake Mary and received her 8th grade diploma in 1944.  Christine grew up on a farm near Lake Mary and waitressed at several barn dances that were hosted on the farm.

Christine met Vernon “Bud” John Chan and he gave her the nickname “Tinker” as he said that whenever he saw her, she was always tinkering with something.  On September 14, 1948 Tinker and Bud were united in marriage at St. John Nepomuk Catholic Church.  They lived in a one-room house the first year of their marriage. On December 29, 1949, Bud and Tinker bought a farm in Holmes City Township (near Pocket Lake) and made a home for themselves and their children Wayne and Jeannie.  Tinker loved all aspects of life on the farm!  In 1978, Bud and Tinker moved to Lowry, into a house which they had built together. When you stopped by the house, you were sure to be greeted by the aroma of fresh-baked kolaches or goodies, as Tinker would always be baking something for Bud, family, friends, and neighbors to enjoy.  Tinker was a seamstress that made and gifted several quilts and had a wonderful talent of sewing!  She did housekeeping for many neighbors over the years and also worked at the Lowry cafe.  Tinker had a garden that was truly a sight to see, from the raspberry patch, to all of the vegetables and beautiful flowers.  A tour of the garden was always given and before guests could depart, a plate full of goodies had to be sent along!  Tinker loved garage sales, whether she was shopping or hosting them, she could always find a treasure.  Tinker moved to Bethel Manor Apartments in Alexandria in 2007, when Bud moved into Bethany Home.  In 2019, Tinker moved to Knute Nelson and in 2020, relocated to the Glacial Trails Memory Care in Starbuck due to declining health.


She was preceded in death by her husband, Bud in 2012; parents; granddaughter, Rebecca Marie Klimek;  sister, Dorothy Boesen; and brother, Jimmie Doraska.

To order memorial trees or send flowers to the family in memory of Christine "Tinker" Chan, please visit our flower store.