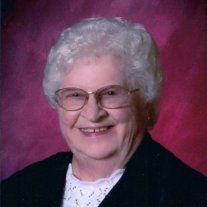 Mass of Christian Burial will be held 11:00 a.m., Thursday, May 31, 2012, at Sacred Heart Catholic Church in Urbank with Rev. Fr. LeRoy Scheierl officiating. Music will be provided by the church choir, organist, Angie Thoenes and vocalist, Yvonne Debilzen. Burial will take place at the church cemetery.

Visitation will be Wednesday evening from 5-8 p.m., at the church with parish prayers at 5:30 p.m., and Christian Mother's rosary at 7 p.m. The visitation will continue one hour prior to the service.

Celestine Frances "Sally" Suchy Debilzen was born December 4, 1935, to George and Eleanor (Pinkowski) Suchy in Parkers Prairie. She was raised in Leaf Mountain Township near the Millerville/Urbank area, where she attended Millerville Catholic School through the eighth grade. She was baptized and confirmed at Seven Dolors Catholic Church in Millerville. Following her education she worked a few years for Clarence and Elizabeth Dorn. She was united in marriage to Raymond Bernard Debilzen on September 28, 1954, at Seven Dolors Catholic Church in Millerville. Shortly after being married, Sally's parents died. Sally and Ray became parents to Sally's younger siblings, Kenny, Marcine and Barb, along with starting a family of their own. Sally was a member of both Sacred Heart Catholic Church and Christian Mothers. She enjoyed gardening, her many flowers, feeding birds, baking, quilting, scrap booking, Saturday night dances and card parties. She especially enjoyed spending time with family and friends.

To order memorial trees or send flowers to the family in memory of Celestine Debilzen, please visit our flower store.
Send a Sympathy Card