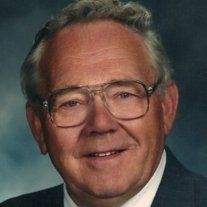 Visitation is 4-7 p.m., Friday at Lind Family Funeral Home in Parkers Prairie and will continue one hour prior to the service at the church.

Carold Louis Hilgren was born July 11, 1924, to Hjalmer and Gertie (Nelson) Hilgren at home in Eastern Township. He was baptized and confirmed at Esther Lutheran Church. His first eight years of education were at Joy School in Eastern Township. He graduated from Parkers Prairie High School in 1943. Following his education he worked on the farm with his dad and helped many neighbors. Carold was united in marriage to Lucille Simonson November 26, 1947. Following their marriage they farmed until 1952, when they moved into Parkers Prairie. To this union, two sons were born, Steven and Thomas. Carold and his brother, Larro entered a joint business owning and operating Northwood Specialty Company. In the 1970's, Carold sold the business and purchased the Ford Garage. He was a bus driver for 27 years, delivered fuel for Penrose Oil and enjoyed carpentry. Carold was a member of First Evangelical Lutheran Church, the Parkers Prairie Fire Department until retirement and the Lion's Club for almost 30 years. He served on the church board, school board, also as chairman, city council and one term as Mayor.

He was preceded in death by his parents; brothers, Dennis Hilgren and Jerry Hilgren and an infant son.

To order memorial trees or send flowers to the family in memory of Carold Hilgren, please visit our flower store.