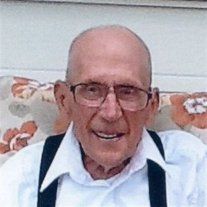 Visitation will be 4-7 p.m., Friday at the church and continue one hour prior to the service.

Carmen Morris Hemquist was born October 20, 1924, to Oscar and Alice (Lukken) Hemquist in Parkers Prairie. He was baptized April 12, 1925, and confirmed May 1, 1938, at First Evangelical Lutheran Church by Rev. Lampbert Engwall. He attended District #236 School for eight years. He served in the U.S. Merchant Marines during WWII for two years. Following his honorable discharge, he returned to Parkers Prairie. He was united in marriage to Agnes Schiewe June 10, 1948, at Immanuel Lutheran Church in Parkers Prairie. Following their marriage they made their home four miles northeast of Parkers Prairie, where they raised their five daughters. Carmen hauled milk for ten years and worked for the Otter Tail County Highway Department for six years. He crushed rock and drove truck for Wayne Lee Construction out of Alexandria for 21 years. He cut wood, neatly stacked it and sold it as firewood. He loved being in the woods and cut wood for enjoyment. He was a whiz with small gas engines and could fix anything that didn't work. He helped his neighbors with their tractors and small engines and was an excellent inventor. He enjoyed driving his homemade wheelchair and old fashioned show tractors in the Parkers Prairie Fall Fest parade. He was a member of First Evangelical Lutheran Church and former church council member for six years. He was also a member of the American Legion Post #219.

He was preceded in death by his parents; grandson, Justin Carlson and brother, Carroll Hemquist.

Urn bearer will be his grandson, Ryan Hermes. Honorary urn bearers will be his remaining grandchildren and, dear friend, Arlo Peterson.

To order memorial trees or send flowers to the family in memory of Carmen Hemquist, please visit our flower store.
Send a Sympathy Card