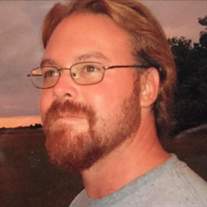 A celebration of life will be held 3 p.m., Sunday, February 21, 2016, at Lind Family Funeral Home in Alexandria with Rev. Holly Ulm officiating.

Visitation is 1 p.m. - 3 p.m., Sunday prior to the services at Lind Family Funeral Home.

Brent was born in New Ulm, Minnesota, on January 7, 1974, to parents Edward and Jane Maidl; he also had an older sister, Kristi Hughes (Maidl). As a child, Brent began his elementary school years in New Ulm, and then upon entering second grade moved to Alexandria. He lived with his family in the Alexandria lakes area until he graduated from Jefferson High School in 1992.

Those who knew Brent spoke of him as a gentle, kind, loving, and caring soul. His friends knew him to be loyal, courteous, and thoughtful. Brent's talents were many; he was an artist, a musician, a photographer, a rock hound and cabochon maker, a gardener, an animal lover, gifted athlete, and a sailor. He could build things; he could fix things; he had a great imagination. He was funny, charismatic, saw the world in a unique way and left his mark. Brent was adored by his nieces and nephews; he took time to cultivate their appreciation for nature and the environment. Many have said that their time with Brent, whether short or long, left a lasting impression.

Throughout his whole life, Brent was one to seek adventure both physically and intellectually. Brent appreciated spending time in the mountains, at the ocean beaches, and hiking in the forest. His quest to know more about geology, plants, and animals led him to remarkable knowledge and appreciation for rocks and minerals from around the world. As an adult, he lived in multiple locations in the northwest and throughout Minnesota. He decided to purchase a home in Duluth in 2014, where he lived with his beloved husky dog, Chloe.

Brent was preceded in death by his maternal and paternal grandparents.

To order memorial trees or send flowers to the family in memory of Brent Maidl, please visit our flower store.