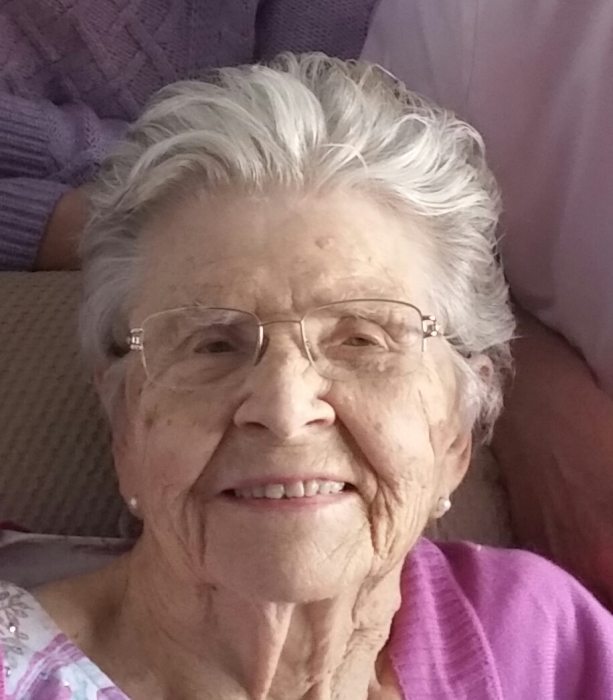 Visitation is 5-7 p.m., Friday at Lind Family Funeral Home in Alexandria and will continue one hour prior to the service at the church.

Betty was born June 8, 1923, to Walter and Adeline (Dahlke) Dobberpuhl in the granary on their family farm in Carlos Township, they moved into their house later that summer.  She grew up playing with her sister in a grove of trees behind the granary and watching over their little brother.  She helped her dad a lot with the outside chores and remembers times of having to rescue the cows in the midst of a blizzard.  Since their family boarded the country school teacher, she was allowed to tag along to school at the age of 4, and got a head start.  She attended Alexandria High School, but would have to walk several miles home if she wanted to participate in any extra-curricular activities so those opportunities were limited.  Even the routine daily bus ride home required a two-mile walk.  After graduating in May, 1940, Betty met Erwin at a barn dance and they later married February 23, 1941, and made their home on the Dittberer farm in Leaf Valley. Apart from the endless hours of farming and all that goes along with that and raising three girls, they enjoyed gardening, playing cards, fishing and dancing!  After they moved to Alexandria in 1963, Betty worked in various clerical and bookkeeping positions at the Douglas County Court House, Land O’Lakes and State Farm Insurance.  During those years, they enjoyed their lake cabin—more fishing, card playing, hosting family and friends, and making sure everyone was well fed!  She was especially known for her bread baking, caramel rolls and apple pies of which she always had dozens frozen and ready to go in the oven.  After retirement, they were snow birds for many years in Arizona.  Following her husband’s death in 1998, Betty moved to Arizona full time.  In 2007, Betty decided to go back “home” to Minnesota and lived in Minnetonka near daughter, Ruth, until returning to Chandler in November, 2015. She spent the last season of her life at Atria Chandler Villas, where she readily made new friends at 92, and was loved and cared for by the staff. Once again, she quickly became active in playing cards at every opportunity, Bingo, enjoying special entertainment, going on Sunday afternoon drives and spending time with family.  When no longer able to live independently, she moved in with daughter, Joyce, in October, 2016, until she went to be with the Lord.  She loved Jesus as her Lord and Savior and her faith was the foundation of who she was throughout her life.

She was preceded in death by her parents; husband, Erwin; sister, Muriel (Paul) Muyres; and brother, Vernon Dobberpuhl.

To order memorial trees or send flowers to the family in memory of Betty Dittberner, please visit our flower store.
Send a Sympathy Card