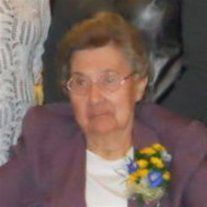 Visitation will be from 4-7 p.m., Thursday at Lind Family Funeral Home in Parkers Prairie and continue one hour prior to the service at the church.

Bernice Elda Diedrich was born December 15, 1925, to Otto and Clara (Brockopp) Grothen in Folden Township, Otter Tail County, Minnesota. She grew up on the family farm in Miltona Township and attended Country School District #73. Following her education she worked at Parkers Prairie Creamery and Anderson's Café. She was united in marriage to Harold Diedrich November 16, 1947, at St. Paul's Lutheran Church Parsonage in West Miltona. Following their marriage they moved to Fargo where she worked as a waitress. They returned six months later to the Brockopp family farm in Otter Tail County. They purchased the Dreger family farm in 1955, where they lived and farmed until their retirement in 1992. Following their retirement, they moved into Miltona where they lived until Bernice moved to Knute Nelson Memorial Home in Alexandria in March of 2009. She was a member of St. Paul's Lutheran Church in West Miltona and the Miltona V.F.W. Auxiliary. She enjoyed baking, cooking, flower and vegetable gardening.

She was preceded in death by her parents; sisters, Norma and Evelyn; brother, Melvin; son, Ronald and daughter, Terry. Bernice had special memories of all family members who had passed and dearly missed her children who had gone before her.

To order memorial trees or send flowers to the family in memory of Bernice Diedrich, please visit our flower store.
Send a Sympathy Card