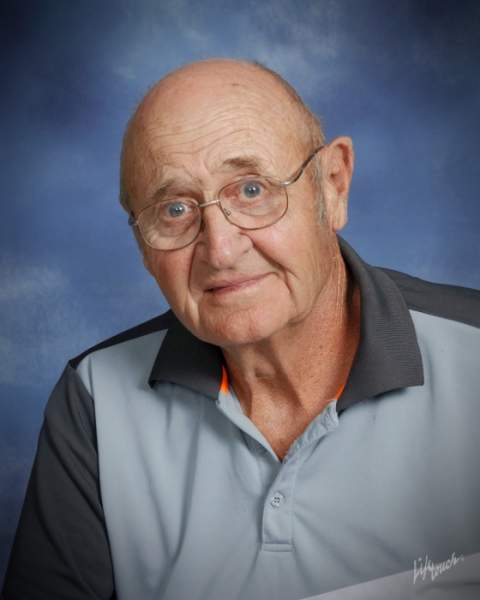 Mass of Christian Burial is 11 a.m., Friday, September 23, 2016, at Sacred Heart Catholic Church in Urbank with Fr. Peter VanderWeyst officiating. Music is provided by organist, Cassandra Kowalski and the church choir. Burial is at the church cemetery. Full military honors accorded by the Minnesota Honor Guard and the Parkers Prairie American Legion Post #219.

Visitation is 4-8 p.m., Thursday, September 22, at Sacred Heart Catholic Church with 7 p.m. parish prayers and a Knights of Columbus rosary to follow. Visitation will continue one hour prior to the service.

Basil Roy Hartman was born on March 18, 1937, to Oliver and Adelle (Freske) Hartman in Urbank. He was baptized and confirmed at Sacred Heart Catholic Church. He attended country school in Urbank through the eighth grade. He continued his education at West Central School of Agriculture in Morris until 1952. Following his education, Basil served in the United States Army from 1955 to 1957. Following his honorable discharge, he was united in marriage to Patricia Dropik on October 26, 1959, at Seven Dolors Catholic Church in Millerville. They were blessed with seven children. Basil worked at Blanca Aircraft and Lakeland Sunbeam Bakery in Alexandria for 10 years. He returned to the family farm and farmed for 47 years. He also worked for Sun Opta in Alexandria from 1997 to 2007, when he retired. Basil was a member of Sacred Heart Catholic Church and the Knights of Columbus. He served on the church board for 15 years and the Parkers Prairie School Board for eight years. He was an assessor for Effington Township, member of the Urbank Lions Club, and Parkers Prairie Shipping Association. He enjoyed visiting with family and friends and especially enjoyed time with his wife, children, and grandchildren.

We, Basil’s family, would like to thank and acknowledge with great appreciation, your kindness, expressions of love, friendship, and support during his illness and especially during this difficult time.  It is in these times of sorrow we learn how much our family and friends mean to us.  Your kindness and sympathy will always be remembered.   Thank you for the prayers, that continue to guide and support us at this time.  God’s peace to all.

No thank you cards will be sent.

"So God Made a Farmer"

And on the 8th day, God looked down on his planned paradise and said, "I need a caretaker." So God made a farmer.

God said, "I need somebody willing to get up before dawn, raise and care for the farm animals, work all day in the fields, feed the farm animals, eat supper and then go to town and stay past midnight at a meeting of the school board." So God made a farmer.

"I need somebody with arms strong enough to wrestle a calf and yet gentle enough to deliver his own grandchild. Somebody to call hogs, tame cantankerous machinery, come home hungry, have to wait for lunch until his wife's done feeding visiting ladies and tell the ladies to be sure and come back real soon -- and mean it." So God made a farmer.

God said, "I need somebody willing to sit up all night with a newborn calf. And sometimes watch it die. Then dry his eyes and say, 'Maybe next year.' I need somebody who can shape an ax handle from a persimmon sprout, mend a fence with a hunk of wire, who can make a harness out of haywire, feed sacks and shoe scraps. And who during planting time and harvest season, will finish his forty-hour week by Tuesday noon, then, pain'n from 'tractor back,' and put in another seventy-two hours." So God made a farmer.

God had to have somebody willing to ride the ruts at double speed to get the hay in ahead of the rain clouds and yet stop in mid-field and race to help when he sees the first smoke from a neighbor's place. So God made a farmer.

God said, "I need somebody strong enough to clear trees, remove rocks, and heave hay bales, yet gentle enough to wean pigs and tend the pink-combed pullets, somebody who will stop his mower for an hour to splint the broken leg of a meadow lark. It had to be somebody who'd plow deep and straight and not cut corners. Somebody to seed, weed, feed, breed and rake and disc and plow and plant and tie the fleece and strain the milk and replenish the self-feeder and finish a hard week's work with a three-mile drive to church.

"Somebody who can connect a family together with the soft strong bonds of sharing, who would laugh and then sigh, and then reply, with smiling eyes, when his son says he wants to spend his life 'doing what Dad does.'" So God made a farmer.

To order memorial trees or send flowers to the family in memory of Basil Hartman, please visit our flower store.