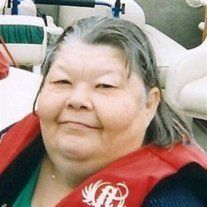 Visitation will be one hour prior to the service.

Avis Ann Verbeck was born January 12, 1952, to LeRoy and Lorinda (Eggert) Verbeck in Parkers Prairie. She was baptized at Redeemer Lutheran Church in Almora. Her family lived in Parkers Prairie before moving to the Brainerd Lakes area where she spent her youth. As a young adult, Avis moved to Fargo where her daughter, Camille was born. Later, she moved to Minneapolis, where her son, Jason was born. She moved to the Motley/Staples area where she raised her family. She was an avid letter writer and enjoyed writing jingles, one of her songs was published and recorded by Loretta Lynn. She enjoyed watching television, especially, Days of Our Lives and the Young and the Restless. One of her favorite activities was picnicking by a lake or river and enjoying a bucket of KFC. She especially enjoyed visiting with family and friends. Avis moved to Moorhead in November of 2012, to be closer to her family. Her final outing was a trip to Detroit Lakes in June where she enjoyed fishing on a pontoon.

She was preceded in death by her parents; brothers, Virgil and DelRoy Verbeck; and sisters, Shirley and Mernalee Verbeck and Donna Roth.

To order memorial trees or send flowers to the family in memory of Avis Verbeck, please visit our flower store.