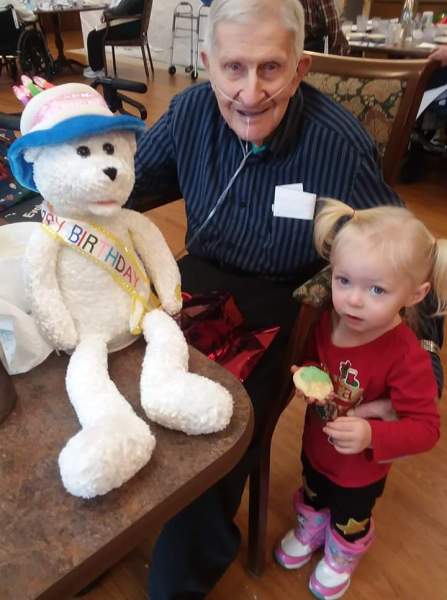 A memorial service will be held at 11 a.m., Saturday, January 23, 2021, at Immanuel Lutheran Church in Parkers Prairie with Rev. Kirk Lee officiating.  Music will be provided by organist, Maureen Diedrich and soloist, Rev. Michael Peterson with full military honors accorded by the Minnesota Honor Guard and the Parkers Prairie American Legion. Private family interment will take place at Mt. Nebo Cemetery in Hewitt.

A visitation will be one hour prior to the service at the church. Please honor all COVID-19 health mandates, including social distancing and wearing of facial coverings.

Arlo Charles Peterson was born on December 11, 1926, to Olaf and Minnie (Olson) Peterson in Webster, South Dakota.  He grew up near Waubay, South Dakota where he attended country school, Central Point District #210, completing eighth grade in six and half years, a start to his formal education.  He lived and helped his father on the home farm.  Arlo served in the U.S. Army during the Korean War from 1952-1954, returning home to continue serving in the Army Reserve for eight years.  Following his honorable discharge, Arlo continued his formal education by completing his GED, but did not receive his certificate until he was 90 years old.  He also worked at Smith Furniture and Elmer’s Paint and Glass in Wadena. Arlo attended a Dale Carnegie Class on impromptu speaking where he shared his faith in a Triune God to those in attendance.  He was united in marriage to Irene Polipnick on June 11, 1960, at Trinity Lutheran Church in Hewitt.  Following their marriage, Arlo adopted Irene’s son, Bruce when he was five years old.  Arlo began learning the trade of carpet installation and flooring.  He started his own business in rural Hewitt, called Peterson Carpet Service where he was known as a “good, honest dealer”, with his son working side by side with him.  After a full day of work, Arlo enjoyed many hours gardening and fishing. Following his retirement, Arlo continued living in rural Hewitt until moving to live at Prairie Senior Villages in Parkers Prairie.  He later moved to St. William’s Living Center.  He was a member of Immanuel Lutheran Church in Parkers Prairie and attended its Tuesday morning Bible study. Arlo was a life-member of the VFW and president of the resident council at St. William’s Living Center.  He will always be remembered for his wit, humor, and jokes.  When Arlo was 67, he left his biography in written form called “In the Quest of Justice”, where he discussed politics, religion, and personal philosophy.

He was preceded in death by his parents; wife, Irene in 2000; sister, Clarice; two brothers, Merlin and Orville; and a half-brother, Arthur Olson.

Urnbearers are his great-grandchildren.

Serving as honorary Urnbearer will be Andy Struthers.

To order memorial trees or send flowers to the family in memory of Arlo C. Peterson, please visit our flower store.