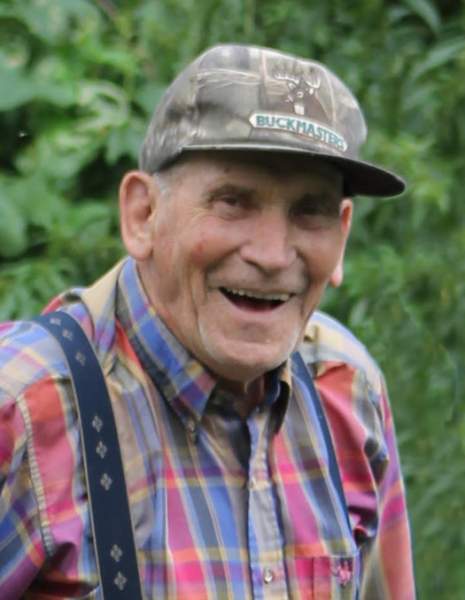 Arlan G. Andresen, age 84, of Parkers Prairie, died June 10th at his home with his family at his side.

A memorial service will be held on Thursday, June 14, 2018 at 11:00 am at First Evangelical Lutheran Church in Parkers Prairie with Pastor Rachel Stout officiating.  Music is provided by organist Pam Wenzel. Interment will be at the Swedish Lutheran Cemetery, rural Parkers Prairie.

A visitation will be held on Wednesday, June 13 from 4 – 7 p.m. at First Evangelical Lutheran Church and one hour prior to the service at the church.

Arlan Gene Andresen was born on November 30, 1933, to Fredrick and Gertrude (Matus) Andresen in Tyler. They lived there until Arlan was six and moved northeast of Parkers Prairie to farm. He was confirmed at the First Evangelical Lutheran Church in Parkers Prairie. Arlan attended County School District #41 through the eighth grade and continued to Parkers Prairie High School and graduated in 1951. Following his education, he continued to farm until he was drafted in 1956, into the U.S. Army. He was stationed in Hawaii in the Medical Supply Corp until 1958, when he was honorably discharged. Arlan returned home and continued farming. He was united in marriage to Margaret Zaske on October 10, 1964, in Deer Creek. They were blessed with three children, Teresa, Mark, and Tim. Arlan had a love for his farmland and passed it on to his son, Tim, who now farms the land Arlan worked his whole life.  Arlan also had numerous hobbies, one of which was gardening.  He was a great gardener of both vegetables and flowers, and enjoyed sharing his goods with family and friends. Another fond hobby was his love for hunting.  He was an avid hunter of ducks, geese, grouse, pheasants, wild turkey, and deer. Arlan looked most forward to the deer hunting weekend each year as his love turned into a family tradition as numerous family members would turn out to hunt, eat, tell stories, and share conversation.  Often times, Arlan enjoyed the outdoors so much that he would just go sit in his deer stand and watch for the wildlife. Arlan also enjoyed watching numerous sports both on television and in person.  Several highlights for him included going to watch his grandson, Aaron play college football for the North Dakota State Bison at the Fargo Dome and going to watch his three grandson’s Bryce, Jaden, and Easton play baseball and basketball as he made two yearly trips to North Dakota to visit and spend time with them.  Arlan was a true family man that loved seeing his children and grandchildren achieve their goals. He also had a special place in his heart for the two youngest family members, Sienna and Bryden.  Being he was a homebody, Arlan enjoyed completing Terry Redlin puzzles and crossword puzzles. He will be dearly missed by his family and friends.

He was preceded in death by his parents; parents-in-law, Erwin and Miriam Zaske; sister, Elaine Geithman; and brothers-in-law, Russ Andrews and Hilding Geithman;.

To order memorial trees or send flowers to the family in memory of Arlan G. Andresen, please visit our flower store.