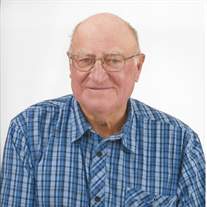 Anthony Paul Laumeyer was born on May 10, 1933, to John and Theresa (Walters) Laumeyer in Greenwald. He was the youngest of 11 children. Tony was baptized and confirmed in the Catholic faith. He attended country school. Following his education he worked for various farmers until he enlisted in the United States Army at age 18. Tony was stationed near the Panama Canal during his time in the service. Following his honorable discharge he lived in the Twin Cities area. Tony was united in marriage to Loretta Downs on May 24, 1958, in St. Paul. They were blessed with six children. Tony worked as a welder for Ford Company for 44 years. They moved to Long Prairie where they bought and ran a dairy farm for 20 years. After retiring in 2000, they lived in Osakis for a short time before they moved to rural Long Prairie where he lived until his death. He was a member of the Immaculate Conception Church and the Osakis VFW Post #7902. He was a former member of both the Moose Club of South St. Paul and Cottage Grove Snowmobile Club. Tony enjoyed bird feeding, coaching baseball, art welding, and playing cards. He also enjoyed farming and taking care of his lawn. Tony especially loved his two dogs, Sassy and Sally.

He was preceded in death by his parents; and ten siblings, George, Ben, Hank, Hubert, Alcuin, Katherine, Marie, Margaret, Rita, and Regina.

To order memorial trees or send flowers to the family in memory of Anthony Laumeyer, please visit our flower store.