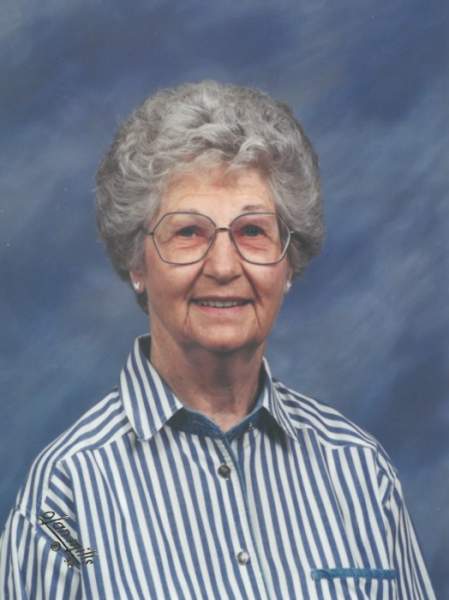 Annabelle Kretschmar, age 98, of Brooklyn Park, formerly of Parkers Prairie, passed away peacefully on Friday, October 13, 2017, at Our Lady of Peace Hospice in St. Paul.

Mass of the Christian Burial will be 10:30 am., Friday October 20, 2017, at the Church of St. Gerard Majella in Brooklyn Park with Fr. Patrick Keyes officiating. Burial is 3:45 p.m., Friday at Parkers Prairie Cemetery.

Visitation is one hour prior to the service at the church

Annabelle Pikal was born August 26, 1919, to Louis John and Anna (Factor) Pikal in Henning.  She graduated from Henning High School in 1938. Following her education, she worked as a night shift telephone operator. Annabelle was united in marriage to Dale Kretschmar on April 25, 1943, in Henning where Dale worked for the Soo Line Railroad as an agent telegrapher. Soon after their marriage they moved to Nekoma, North Dakota and Lancaster, Minnesota. In December of 1960, they moved to Parkers Prairie.

Annabelle worked at the New Café, Lorine’s Grocery Store, and Parkers Prairie School District as a cook until her retirement in 1979. Annabelle continued to live in Parkers Prairie until 2003, when she moved to Brooklyn Park to live with her daughter, Mary.

Annabelle was a devoted wife, mother, grandmother and friend. She had a deep love of family. She enjoyed knitting, sewing, gardening, listening and singing to music and visiting with family and friends.

She was preceded in death by her parents; husband, Dale in January of 1995; two sisters, Virginia and infant Baby Pikal; and four brothers, Harold, Lowell, Howard, and Edwin.

Annabelle is survived by her two daughters, Kathy Furedi and Mary Kretschmar both of Brooklyn Park; two granddaughters, Stephanie (Dion) Kuznia of Bloomington and Michelle (Mike) Houtsma of Eagan; great-grandson Levi Houtsma; and many nieces and nephews.

Memorials are preferred to Our Lady of Peace Hospice in St Paul.

To order memorial trees or send flowers to the family in memory of Annabelle Kretschmar, please visit our flower store.