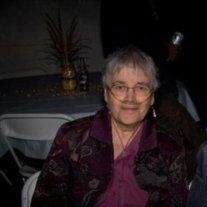 A service to celebrate her life is at 2:00 p.m., Monday, September 30, 2013, at St. Paul's Lutheran Church in West Miltona with Rev. Kirk Lee officiating. Music is provided by organist, Katie Jahnke. Burial to take place at the church cemetery.

Visitation is 5-8 p.m., Sunday at Lind Family Funeral Home in Parkers Prairie and will continue one hour prior to the service at the church.

Andrine Edna was born August 13, 1934, to Carl and Edna (Olson) Kiehne at home at Lake Jessie, rural Alexandria. She was baptized October 16, 1934, at Our Saviors Lutheran Church in Nelson. She attended Districts #80 & #100 for grades 1-5, and District #206 from 6th grade until graduating from Jefferson High School in 1952. She was united in marriage to Edwin Clarence Wilke February 8, 1953 at her parent's farm in rural Garfield. Following their marriage they farmed in rural Miltona. She worked as a waitress in Alexandria, bookkeeper at the Alexandria Creamery and tailor at the Alteration Shop and Alex Tailoring. Following their retirement from farming in 1994, she and her husband moved to live on Lake Miltona. Her husband, "Bud" died July 18, 1999. Andrine continued living on Lake Miltona until moving to Grand Arbor in Alexandria in 2012, where she made many lasting friendships. She was a member of St. Paul's Lutheran Church, its Ladies Aide and The Runestone Rockettes. She was a foster grandparent for the Parkers Prairie Elementary School, which she absolutely loved.

To order memorial trees or send flowers to the family in memory of Andrine Wilke, please visit our flower store.