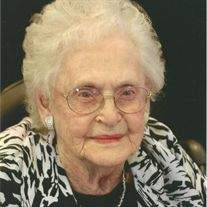 Visitation is 5-7 p.m., Thursday at Lind Family Funeral Home in Parkers Prairie and will continue one hour prior to the service at the church.

Alice Mary Clear was born June 2, 1917, to William and Grace (Veer) Schrader in Gerard Township. She was baptized August 15, 1926, and confirmed March 29, 1931, by Pastor Heuchert at St. Paul's Lutheran Church in Henning. She attended Highway Park Country School District #124, and Henning High School through the ninth grade. Following her education she was a housekeeper for area families and helped on the family farm. Alice was united in marriage to John Clear February 15, 1938, at St. Paul's Lutheran Church. Following their marriage they lived on a farm near Brandon. During this time Alice developed Polio and recuperated at the Sister Kenny Institute in the Cities. They moved to Almora in 1949, and Alice began working at Henning Health Care in the Physical Therapy department. She retired after 20 years of service in 1984. Her husband, John died in 2006, following his death Alice moved into St. Williams Living Center. Alice was a member of Immanuel Lutheran Church and was involved in many church and civic activities. She enjoyed flower gardening, yard work, embroidering, hardanger, camping and jigsaw puzzles and books. Alice loved spending time with her family and will always be remembered for her good sense of humor. She was a wonderful mother, grandmother and great-grandmother.

To order memorial trees or send flowers to the family in memory of Alice Clear, please visit our flower store.