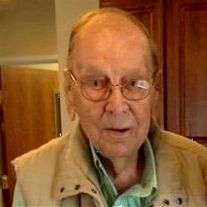 Visitation will be one hour prior to the service at the chapel.

Alfred Gene Johnson was born July 20, 1924, to Forrest and Etta (Nastansky) Johnson in St. Paul. He was baptized November 22, 1925, at Church of Our Savior in St. Paul and was confirmed June 12, 1938, at Chisago Lakes Lutheran Church in Center City. Alfred graduated from Chisago Lakes High School May 27, 1942. Growing up, he learned the auto mechanics trade while working out of his dad's garage. Following his education, Al drove heavy equipment in the South Pacific Islands as a Seabee during World War II from February 2, 1943, to January 24, 1946. Following his honorable discharge Al was united in marriage to Carol Knieff September 5, 1947, at St. Luke's Methodist Church in Frederic, Wisconsin. Following their marriage they moved to Milaca where they owned Northside Gas, Grocery and Cabins with his parents until 1955. Al and Carol moved to Mora and opened Mora Plumbing and Heating which they operated until 1965. They purchased Motel 71 in Redwood Falls and operated it until their retirement in 1984. At the age of 55, Al learned how to fly and received his private pilot's license. They continued to live in Redwood Falls and enjoyed 20 winters at Tip O' Texas Park in Pharr, Texas. Al's wife died in 2010. In 2012, he moved to Garnette Gardens Assisted Living in Redwood Falls until February of 2015, when he moved to Bethany Community Home in Alexandria. Alfred enjoyed hunting, fishing and reading. He also collected toy cars and trucks.

He was preceded in death by his parents; wife; and son-in-law, James Hauptli.

To order memorial trees or send flowers to the family in memory of Alfred Johnson, please visit our flower store.