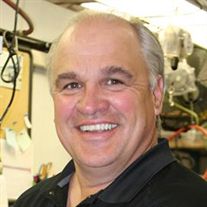 Visitation is 4-8 p.m., Wednesday, at Esther Lutheran Church in Eastern Township and will continue one hour prior to the service at St. William's Catholic Church in Parkers Prairie.

Allen Steven Fyhrie was born June 8, 1960, to Conrad and Christine (Poltiske) Fyhrie in Fergus Falls. He was baptized into the catholic faith June 26, 1960. Al graduated from Fergus Falls High School in 1978. He attended Alexandria Technical College from August 1978, - until completing Machine Tool & Die Technology in May of 1980. Al began working as a machine operator at Alexandria Extrusion in October of 1978. He was united in marriage to Elaine Lunser July 24, 1981, at Zion United Church of Christ in Long Prairie. Following their marriage they lived in Alexandria and managed Maple Ridge Manor until 1994, at which time they bought their home in rural Parkers Prairie. Al continued working at Alexandria Extrusion for his career as Quality Control Inspector, Program and set-up CNC machining, CNC Machine Programmer, Estimating Supervisor, Direct Sales and has been the Inside Sales Manager since 1998. He was a member of the Trapshooting League in Alexandria and Esther Lutheran Church where he served as treasurer for six years. He enjoyed hunting, fishing, camping, spending time with family and friends, playing jokes and making everyone laugh. Al especially enjoyed any opportunity he had to work with his tractor at home. Blessed be His Memory.

He was preceded in death by his parents; sister, Elaine and brother, Lawrence.

To order memorial trees or send flowers to the family in memory of Al Fyhrie, please visit our flower store.
Send a Sympathy Card