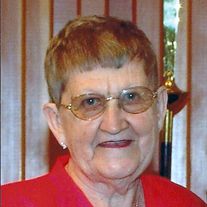 Agnes Bertha Hemquist was born October 3, 1926, to William and Molly (Hart) Schiewe in Sheboygan, Wisconsin. She was baptized February 25, 1927. As a young child, her family moved to the Clarissa area. Following a tragic house-fire accident, where her mother was killed in January of 1931, Agnes went to live with her aunt and uncle in Eastern Township. Agnes was confirmed June 8, 1941, at Immanuel Lutheran Church in Parkers Prairie. She attended Joy Country School, District #55. Following her education she worked at the Sunshine Nabisco Cookie Factory in Minneapolis for seven years. She was united in marriage to Carmen Hemquist June 10, 1948, at Immanuel Lutheran Church in Parkers Prairie. Following their marriage they made their home four miles northeast of Parkers Prairie, where they were blessed with five daughters. Agnes was a homemaker and was famous for her homemade buns. She loved cooking and baking for her family and canning fruits and vegetables. Agnes and Carmen enjoyed traveling to threshing shows and parades together. They moved into Parkers Prairie in 1993, where they lived until moving into St. William's Living Center in 2012. Carmen died January 23, 2013. She was a member of First Evangelical Lutheran Church and its Ladies Aid. She loved spending time with her family, especially her grandchildren.

She was preceded in death by her parents; grandson, Justin Carlson; husband, Carmen; sisters, Eleanor and Dorothy and brother, Henry.

Urn bearer will be her granddaughter, Shannon Hanousek. Honorary urn bearers will be her remaining grandchildren.

To order memorial trees or send flowers to the family in memory of Agnes Hemquist, please visit our flower store.