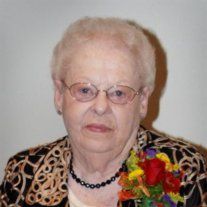 Visitation is 5-8 p.m., Friday at Immanuel Lutheran Church and will continue one hour prior to the service at the church.

Adeline "Addy" was born September 25, 1918, the seventh of twelve children to William and Ottilie (Brueske) Schramm at home in Leaf Valley. She was baptized at Ebenezer Lutheran Church in Leaf Valley by Rev. Kleweno. The family moved to Parkers Prairie when she was two years old. She was confirmed in German by Rev. Sieving on March 20, 1932, at Immanuel Lutheran Church in Parkers Prairie. She attended country school through the 8th grade in Parkers Prairie Township. Following her education, she worked in farm fields and for many families doing housework and taking care of babies. Later, she worked as a waitress at the Parkers Prairie Hotel. Adeline was united in marriage to Henry August Quitmeyer November 7, 1940, at Immanuel Lutheran Church by Rev. Sieving. Following their marriage, they were blessed with four daughters. Raising her children was her biggest joy, she cooked many large meals and baked many goodies for her family. Her door was always open for her children, grandchildren and great-grandchildren. She enjoyed her large garden and canning. In her later years, she spent a lot of time reading books about the Amish and her Portals of Prayer.

To order memorial trees or send flowers to the family in memory of Adeline Quitmeyer, please visit our flower store.